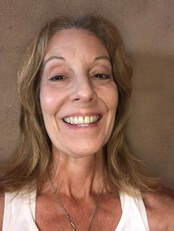 ​Lucy T. Holmes, C-IAYT, Certified Yoga Therapist by the International Association of Yoga Therapy, has been practicing yoga since 1989 and began teaching in 1994. Her background includes training in the Dynamic, Iyengar, Anusara, Astanga, Kripalu, and Bikram traditions of yoga. She completed her first 200 hour Yoga Teacher Training at Kripalu in 1994, and from 2002 to 2004  she attended a state certified, 723 hour advanced studies program in Piedmont, California where she focused on Yoga for Disabilities. While in California she studied with  number of well-renowned teachers, including Elise Browning-Miller, Richard Rosen, Judith Laster, and Rodney Yee.  Lucy holds a degree as a Certified Occupational Therapy Assistant and has worked as a caregiver in homes, residential facilities, and hospitals starting in 2009. Lucy has worked with a variety of populations, including seniors, people in recovery, and folks with mental and physical disabilities in a variety of settings including equine therapy farms and halfway houses. Her approach is informed by her practice of massage therapy 1989 through 2004, and through her participation in Native American and Buddhist ceremony and teachings, experiential education, music and Dunham Technique dance. In January 2016 Lucy traveled to Kerala, India for an immersion in yoga philosophy, meditation, chanting, and ritual. Since 2005 her primary teachers are Matthew and Holly Krepps, Circle Yoga Shala and Mary Paffard,  MaryYoga.  Lucy continues to deepen her understanding and knowledge with ongoing study at Circle Yoga Shala in Jasper, Arkansas.

PRIVATE SESSIONS One-on-one sessions are the most effective way to benefit from Yoga Therapy. All work is done with an emphasis on the independence of the client/student, and with deep honoring and respect for the client/student's inherent wisdom and true nature. Private sessions include an individualized assessment of all aspects of functionality (physical, cognitive/emotional, and spiritual). The client is encouraged to actively participate in setting their own goals/outcomes. Sessions are 1 to 1½​  hours, with a standard rate of $80/hour. Sessions can take place in the student's home or at the studio located in El Prado's Venado Plaza. References furnished upon request. All communications are strictly confidential.

Lucy is a member of the AOTA (American Occupational Therapy Association) and the  IAYT (International Association of Yoga Therapists) and obtained her Yoga Therapist certification in October 2017.​

​Hatha Yoga is a Sanskrit term that can be defined as "Adamant Practice" or "Method to Union" and consists of philosophic, physical, and energetic exercises originating in ancient India. Today Hatha Yoga classes commonly focus on the physical practice of postures (asana) which are influenced by modern Indian gymnastics and wrestling. Some classes include meditation, chanting and kriyas, which can be movement, breathing, or cleansing practices. Yoga is considered to be a path of Self-inquiry, Self-development, and Self-transformation. According to the Hatha Yoga Pradipika, Hatha Yoga is  a practice that employs restraints of personal and social conduct,(yamas and niyamas), physical exercises (asana), breathing techniques (pranayama), turning the senses inward (pratyahara), focused concentration (dharana), meditation (dhyana), and deep relaxation and surrender (samadhi). Thus Hatha Yoga can create a balance of power, clarity, and equanimity, as well as an opening to one's full potential. The scientific system of Yoga is based on the teachings of ancient texts called Vedas and Upanishads, as well as a rich oral tradition and classical texts such as the Hatha Yoga Pradikipa, the Bhagavad Gita, the Ashtavakra Gita, and the Yoga Sutra of Patanjali. Yoga recognizes a relationship between the basic unchanging True Nature of human beings and Its awareness of and identification with the phenomenal and changing empirical world.